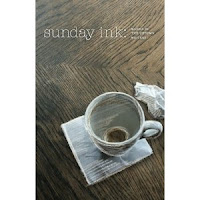 THIS BOOK CAN ONLY BE BOUGHT ON AMAZON

Editor note: Deeply sad to say I found out that one of the Uptown writers Sandra E Jones passed away not long after this reading took place. Words cannot express how sad I am for this little group of writers. I wrote this review before this news but would like to add Seattle’s loss can only be comforted by the knowledge that Ms. Jones lived to see this book published.

The short version: Who says independent spirit is dead. Not these ladies.
Eight local authors calling themselves “The Uptown Writers” combined forces to produce an independent published anthology of poems essays, excerpts of plays and fiction called “Sunday Ink."

The Richard Hugo House is a Castle Keep for the Seattle community of writers. Inside Hugo House, a full bar sells booze providing a café setting to go along a variety of literary activities. Tonight they sponsored a reading by the Uptown Writers and their new anthology “Sunday Inc.”

The Uptown Writers Carol Bolt, Pam Carter, Geri Gale, Sandra E. Jones, Susan Knox, Stacy Lawson, Arleen Williams, and Janet Yoder are members of the same Seattle writing group the past eighteen years. Someone got the bright idea to combine their material and publish something and thus the birth of “Sunday Inc.” This is an eclectic, independent book designed to find something genre appealing to many readers.

It’s a packed Hugo House on the small stage with perhaps 150 souls stuffing themselves in on a rain dark Seattle night. I hate when readings are delayed but there is a bar and drinks are flowing so I can wait knowing that a liquored up crowd makes for a potentially exciting author reading.
When it finally gets going there was a long (22 min by my watch) introduction to how the book came about and then special acknowledgements by the authors to those who made this project possible. The book designer, the editor, the cover art, the person who made the book marks, Amazon.com, family, friends, Romans, countryman, MY GOD START ALREADY. I need a drink. Could I make my way through the packed crowd for a glass of box wine or leave for the Comet Tavern? The tavern was winning out: Until…

It occurred to me, no agents were thanked. The “Uptown Writers” accomplished this on their own with support of friends and those dedicated to making a dream come true. I sit my ass down.

Producing a book is damned hard. Just try it. Getting published is harder. I realized a dream being fulfilled by these women. They had a vision and completed the task and knew that nothing as seemingly simple as publishing a book could be done without great effort and energy and support of individuals, not making a whole lot of money.

Independent publisher and author Nathan Everett, from Long Tale Press, once told me that that in 2009 there were over 400, 000 books published in the United States but only 15% of all those books sold over a hundred copies. Sell a hundred copies and you are ahead of 85% of all authors out there.

I took in the huge room of supporters. I applauded the Uptown Writers and those who helped these women, knowing that my snark criticism will be saved for another time.

I have a soft spot for first time readers. It’s hard to entertain and sometimes it has the embarrassing aura of my sixth grade book report. (I did my best, so kiss my ass Mr. Nelson)

Of the eight authors favorite reading was done by the elegant Geri Gale. She is a mature, refined writer and tonight she read one pissed off poem with a soothing voice of an NPR moderator.

It was strange hearing that voice expressing those words. Her poem was a sharp clear message of anger, opinion and call to action and yet the juxtaposition could not have been stronger. I thought of a thousand actors who could have read Ms. Gale’s poem and blown the roof off of Hugo House and yet I wonder if it would have had the same effect. For the rest of that night, I could not remove that portion of the evening’s program out of my head.
Posted by IClaudio at 9:34 PM 1 comment: